Gentle density comes to Scarborough by the lake 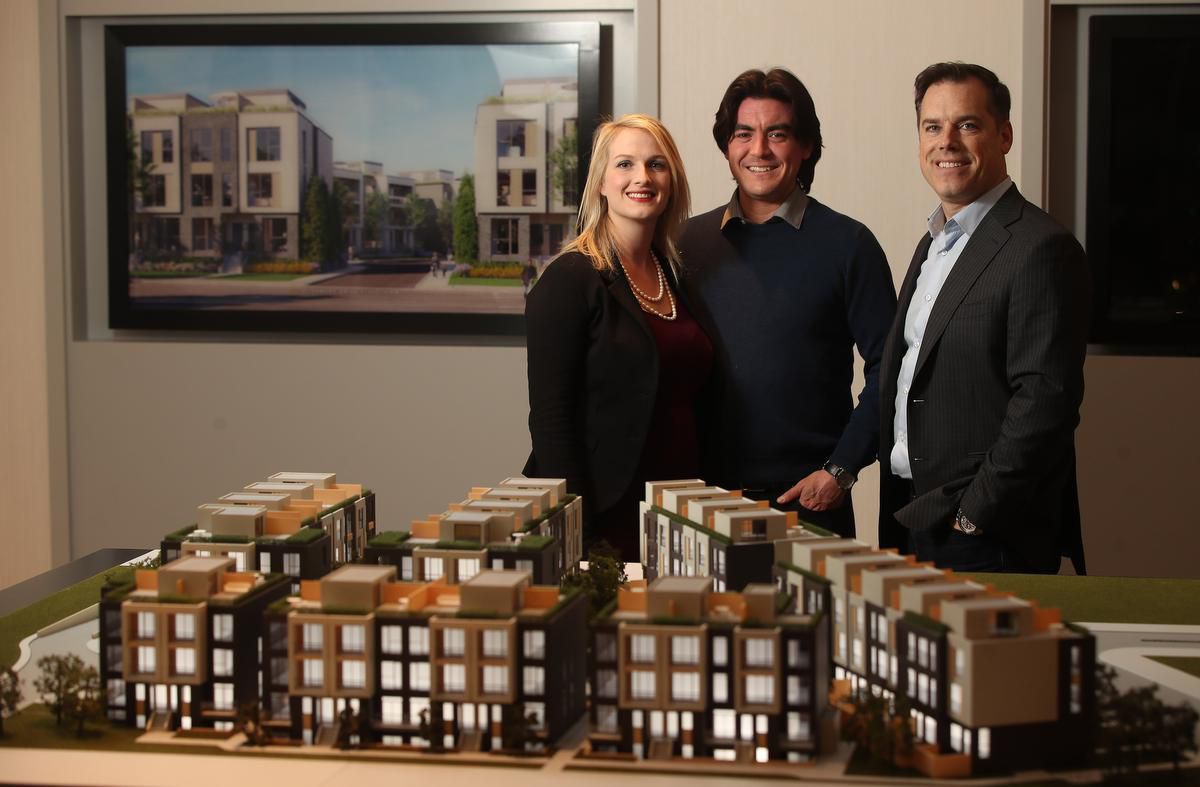 Bonnie Burak and Scott Hizaka expected to buy a small fixer-upper as their first family home a few years down the road. But those plans went out the window when a new door opened unexpectedly. By chance, they spotted the presentation centre of a new development of modern townhomes in east Toronto’s historic Birch Cliff neighbourhood last summer. It was then that home ownership became an immediate possibility for the couple. “We thought, ‘Wow!’ — crunched some numbers and figured we can do this,” recounted Burak.

“This” was the purchase of a three-bedroom unit with an outdoor patio and just over 1,000 square feet of interior living space. It’s one of 118 condominium townhomes called Clonmore Urban Towns that Core Development Group will be building on a large parcel of land northeast of Kingston Rd. and Victoria Park Ave.

The community stretches from just below Danforth Ave. south to Lake Ontario and the Scarborough Bluffs. It was first developed in the 1840s by the equestrian-based Toronto Hunt Club, which has evolved into today’s golf-based The Toronto Hunt with more than 70 acres in the neighbourhood. Birch Cliff had the distinction of being a “streetcar suburb” — a unique creation since vehicles drove the development of the city’s suburbs after the Second World War.

Core’s downpayment plan — four payments of five per cent over the period until occupancy in late 2021 — means Burak and Hizaka can afford a three-bedroom home a short walk from where her mother lives. They can continue to save, knowing they’ve locked in their purchase “at this really great price,” said Burak, an east-ender since she was a teen. Prices on the larger units range from $750,000 to over $1 million.

The couple’s plan is to “grow into it and start a family there,” said Burak, a 30-year-old journalist and associate producer for a media company. “It looks like a home, it feels like a home,” Hizaka said about their future two-storey residence. “One thing I liked is they’re not huge buildings. They work well with the homes in the lower-density neighbourhood,” added Hizaka, 35. The cluster of seven buildings called Clonmore Urban Towns is Core’s second lowrise project in the area. It will complement a smaller collection of similar urban townhomes, called Birchcliff, that are under construction nearby at Kingston Rd. and Birchcliff Ave.

It’s a mature part of Scarborough that’s ripe for rejuvenation and has long been a desirable community to raise a family, said Core president Bryan Nykoliation. More residential and retail development are coming to the area, which is an added draw, he said. The three- and four-bedroom towns still available at Clonmore — smaller units have sold — are great for families, Nykoliation said, adding he also expects interest from millennials and local downsizers. He described the stacked townhomes in 3-1/2-storey buildings slightly set back from the street as a “hybrid of a townhouse and condo” that will have “more of an integrated neighbourhood feel.”

Hikers Hizaka and Burak will find plenty of green space and walking trails nearby and in the Beach, a 15-minute stroll away. The historic neighbourhood of Birch Cliff runs along the lake from the east end of the Beach to the Scarborough Bluffs. Clonmore buyers and residents will also have easy access to Danforth Ave., the GO train station at Main St., and the TTC’s Main and Victoria Park subway stations. For Burak, who works in north Scarborough, the easy commute is another plus.

She said she’s been “casually” saving for a home for 10 years in a housing market she calls “pretty intense.” The couple currently rents the main floor of a bungalow. Their new home represents “good value in terms of space,” said Hizaka, who had noticed much smaller condos in the Junction going for about the same price.

Burak, an avid cook, is looking forward to using every corner and countertop in the European-inspired kitchen outfitted with an island. “I’m all about the meal prep,” she said. “I love that the kitchen is big, airy and open concept. And the fridge is huge and very organized with interesting compartments and a giant freezer.” They’ll also make good use of their outdoor space off the “luxurious” master suite, where they can enjoy “a nice fancy coffee in the morning,” she said. Upper units will have a large rooftop terrace while lower units come with a patio.

The townhomes will have contemporary stone-and brick exteriors with large expanses of glass, said architect Pierre-Alexandre Le Lay, of RAW Design. The firm also designed Core’s Birchcliff development. Featuring a “series of blocks that frame lush, intimate courtyard spaces,” the larger project on Clonmore Drive will be “more of a community,” said Le Lay. As well, he added, they’ll use a geothermal heating and cooling system. Rough-ins for electric vehicle charging stations will also be added, along with bicycle parking and storage.