City living with a side of nature 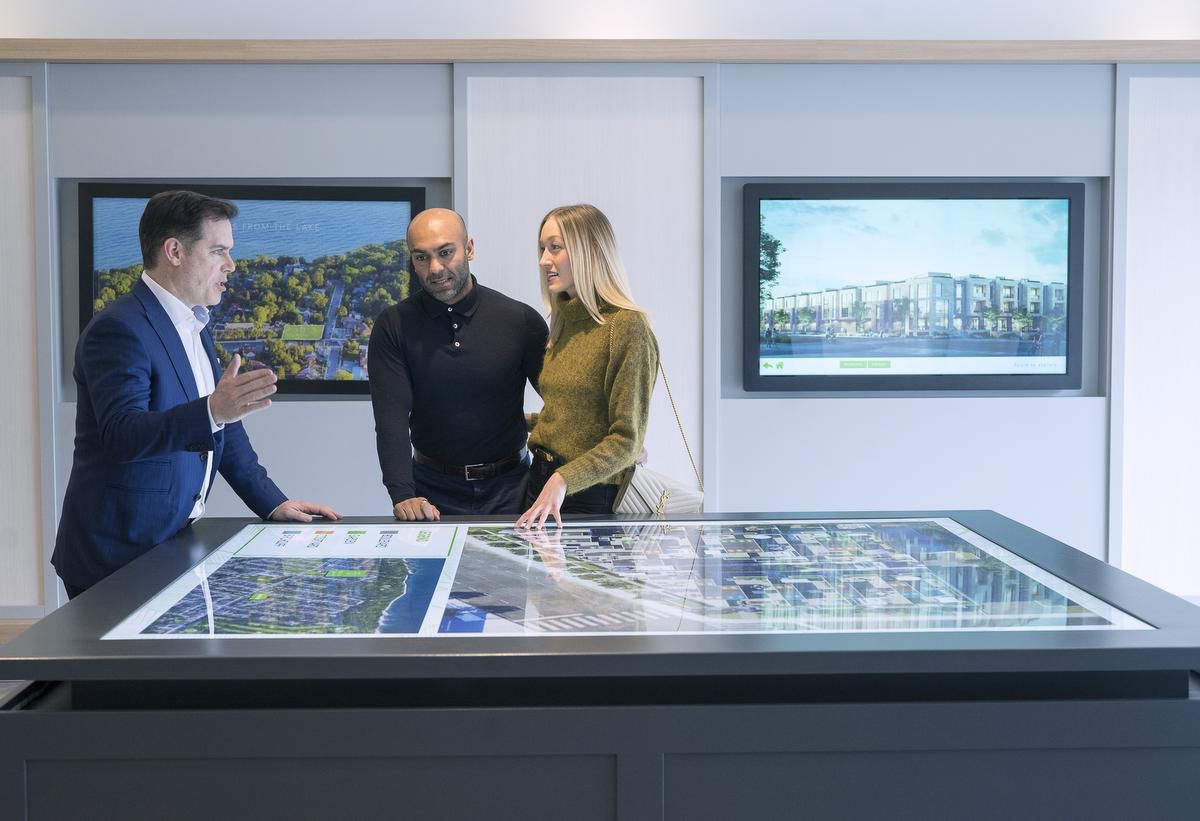 Birchcliff ‘feels like a neighbourhood’ with parks, shops near Lake Ontario

Downtown: a 20-minute drive. Bluffer’s Park: 15 minutes by bicycle. The Beach: a 30-minute walk. Lake Ontario: far as the eye can see. “Close enough, far enough” could well be the slogan for Birchcliff Urban Towns, a new collection of 52 townhomes on Kingston Rd., just east of Warden Ave.

That’s where Leane Lardner and Manny Sahota scooped up the largest unit, a three-bedroom, upper-level suite that will become their first family home. Distances and proximity were part of the picture when the Toronto couple mapped out their future, which will include a career change and children.

Moving from their St. Lawrence Market-area condo to the southwest corner of Scarborough will put them close enough to everything on their checklist— yet far enough from the pace and prices of downtown Toronto. “We needed a place close to the city with that St. Lawrence feel but not so busy,” explains Sahota, 33, a management consultant. They’ll be transitioning to a quiet, safe community and a home without the maintenance and price tag of a detached house, says Lardner, a 27-year-old lawyer.

Easy access to parks, nature and outdoor activities is also a priority for the busy professionals who plan to begin working full-time on their health-care transformation business called MindFit Group, which helps people live healthier lives.

The couple was immediately drawn to Birchcliff Urban Towns, which is being built by Core Development Group in conjunction with capital partner Harbour Equity. It took them less than 24 hours to make the decision to purchase their $1-million end unit, Lardner says.

The lowrise project, the first of three developments the builder has planned for the area, is located southeast of Kingston Rd. and Birchcliff Ave., a corner that’s underdeveloped and ripe for rejuvenation, according to president Bryan Nykoliation.

Years ago, the neighbourhood of Birch Cliff, which runs along the lake from the east end of The Beach to the Scarborough Bluffs, was an affluent bedroom community, he says, noting there are still $2-million homes close by.

Core “saw an opportunity” to be part of an ongoing gentrification that is turning the historic neighbourhood into an extension of The Beach, Nykoliation says. “We’re invested in the area,” he adds, noting the community’s seasonal markets, cafes, restaurants, retailers, library, recreation centre and arena, trails and parks, as well as its proximity to Queen St. E. and Danforth Village. Bus, subway and GO stations are also nearby.

The enclave of modern townhomes with a façade of tan stone, rich brown brick and big windows will enhance the streetscape and bring a modern vibe to roads dotted with 40- to 70-year-old houses, according to the developer. “We could have done six storeys but chose urban towns because they’re a more novel type. It’s a better fit for the area,” Nykoliation says. “It has an enchanting exclusivity to it.”

Designed in a U-shape around a shared landscaped courtyard with walkways leading out to Kingston Rd., the two storey homes come in upper-level units with a rooftop terrace and lower-level units with a garden patio. With prices starting in the mid-$500,000s for the smallest unit, the towns are available with one, two or three bedrooms. Many have a den or flex space that can be used as a reading nook or office. The open-concept layout on the main level facilitates a seamless flow from living and dining areas to the sleek, European-inspired kitchen with island and breakfast bar. Ceilings are nine feet and flooring is wide-plank laminate throughout with porcelain tile in bathrooms and laundry closet.

With its high-quality construction and proximity to downtown, “our project is really good value,” Nykoliation says, adding it will appeal to downsizers as well as young families. Occupancy is slated for late 2020.

Thanks to the geothermal heating and cooling system and other environmental features, the development will exceed green standards, he points out, noting that residents will save seven or eight per cent on their energy bills. Roughed-in charging stations for electric cars will be provided in underground parking areas and bicycle storage, as well as grade-level bike parking.

Mini parkettes and benches in the courtyard provide a safe environment for kids to run around and adults to relax, the developer says. Sahota and Lardner did their research and visited the area. “It feels like a neighbourhood,” Lardner says. Sahota was impressed by what a “great place” it is to raise children. “You can walk across the street to the school in a safe neighbourhood.”

The couple had looked at properties in the city core but the layouts “didn’t even compare,” and the prices per square foot were significantly higher, he says. Their north- and south-facing unit comes with a rooftop terrace of almost 400 square feet with views of the water. “We’re surrounded by nature,” Lardner observes. “There’s a beautiful trail that runs along the water all the way to Ajax.” There’s just one thing about Birchcliff that’s too far away for Lardner’s liking: moving day. “Two years!” she exclaims. “We’re so excited. I can’t wait to move in.”